TAKE THE LEAP………. the leap of faith 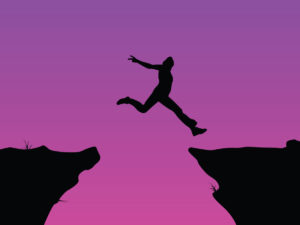 Against all levels of common sense and basic logic, there are times when we must simply take the leap and step into the unknown.  Take a deep breath and jump into the abyss, trusting that it is the correct thing to do.

Doing what I need to do for my highest good is often a daunting challenge. I had been cutting men’s hair at this particular salon for about 9 years and I loved what I did and I loved my boss and my coworkers.   But I had a challenge. My doctors had been telling me for the past year that I need to quit cutting hair because I had two torn rotator cuffs and two dislocated biceps.   I know, I know.  The pain continued to increase in severity and I kept cutting hair.  It was only two days a week but the effort to raise my arms to properly cut was incredibly painful.  I know. I know.  I have to quit.  But I can’t!

While still in the “thinking about it” stage, I attended a retreat in another state.  At one of the workshops, the facilitator shared about having to step down from a position she loved because it was affecting her health.  I totally identified with her internal battle.  Keep doing what you love knowing it could kill you, or surrender to what needs to be done.  She did and a new door opened to a roomful of opportunities even greater that what she had. When I told her I wasn’t sure I could afford to quit she reminded me I could not afford to not quit and when we do what is right, we are taken care of.   Just as in her case – new and greater opportunities presented themselves –actually fell into her lap.

I discussed our similar stories with here and she told me I needed to quit.   Heck, I knew that – I had known it for a long time.  But, HOW?   I was terrified.

I had a suitcase full of excuses. For one, my coworkers were all scheduled for vacations (and one surgery) and I didn’t want to mess them up. When I returned from the retreat I did learn my coworkers surgery was cancelled (there goes that excuse).  Two, I was still concerned about the money.   So, I went from two days a week to one day.   That lasted one day and I knew I no longer had choice.  Money or no money, my body said stop.  No more.   So I gave a one week notice.

Much to my surprise, my boss was fine with the news.  She said she had a feeling it was coming because I was in so much pain.   Wow.

Here is the really fun part.  On my last day (and I was in so much physical pain, my decision was basically affirmed and confirmed for me), I was telling a client in my chair that it was my last day.

He cried out, “Oh no!  This is only my second time since my previous barber quit and sent me to you.  Now what do I do?”

His brother-in-law Len,  was a barber who had been cutting hair in his house but could no longer do that so he had sent many clients to me and to the shop where I worked.   In fact, my client’s wife was getting her hair cut at same time with another stylist.

Later that night I received a text from Len who had sent so many clients to me, asking if my position had been filled, yet, because he heard it was my last day.   Nope, and it is available.   I set him up with an appointment with my boss for the very next day and she hired him.    What?   All my concerns were taken away in a flash.   Actually, when it is supposed to be, it usually unfolds just like that in the most magical way.  Not one little blip.

She told me he is a male version of me!   He only wanted to work the days I was working and he only does men – just like me.   I quit on a Tuesday and the very next Monday he was in my chair.   Not one day was missed without having a barber,

He and my boss are both thrilled and I am excited and relieved that it all worked out and I have no guilt!!

I have been praying for about 5 years to have more time at home to just write and I now have it.  And,  many other things I am not yet ready to talk about, are coming to fruition – things that I expect will be income producing.

I surrendered and  took a giant leap of faith and it worked!!   I feel no regrets, no guilt, no shame and I am very, very comfortable with how my life is unfolding.  The bottom line – the magic of it all – is this.  When it is time to take the leap and we actually have enough faith to do it – it works for everyone involved as the above story tells.   No one gets hurt and everybody wins.  Just another awesome magic show.   I might ask myself,  “What took me so long?”  But,  the truth is,  I took the leap at the exact right time and I knew it because I was listening to the inner voice which said,  “now.”

Remembering another time when I took a ridiculous leap also helped me to go for it.   I am adding that story as well because it, too, is an amazing “leap of faith” story.

In the early 1980’s,  I was interested in moving from an apartment I actually enjoyed and could afford and where I had lived for 8 years to an area closer to where I worked.

I wanted to move closer to where I worked in order to cut down the drive time which seemed to take longer and longer almost daily.  The problem was I could not find anything I could afford because I worked in a rather pricey area.   I had looked for about one year.  The search involved the daily newspaper, advertisers and driving up and down streets – all to no avail.  There was simply no way I could make that move.

One day, I was sharing my challenge with a friend.  He said to me,  “you are the one always talking about taking leaps of faith,  why don’t you just give 30 days’ notice where you are living. “

What?  Are you kidding me?   I shared with him all I had been doing for the past year as part of my search.

He did not back down.  He continued with how it was time for me to step out in faith or quit advising others to do it.

But, against my better judgement and all forms of logic, I went home and gave my apt manager 30 days written notice to move.   My apt mgr. asked where I was moving to and I said I had no idea.   It was the craziest thing I had ever done and was done completely in faith.

Two hours after I gave 30 day notice to my manager, I received a telephone call from a client [I was working as a barber but had recently received my real estate license].  The caller was a hair- cut client but also a realtor who was trying to help me get starting in that business.

He called because he wanted me to list his townhouse for sale.  Of course, I immediately agreed.  And then he told me he needed me to also find someone to live there.   I asked him how much for rent because I was looking for a place.  He said “for you, nothing.”

“Are you kidding me?”

It was a 2 story, 3 bedroom furnished townhouse with a 2 car garage …. Across the street from my work – for free!!!!

I lived there for 6 mos before it sold and I had save enough money to buy a house.  Go figure.

What is the leap you are avoiding?   Let me know

All stories by: Carol Davis